Skip to content
By February 19, 2021Entertainment NewsLeave a Comment on Michael B. Jordan to produce Muhammad Ali series with Jay-Z for Amazon

Michael B. Jordan announced that his production company has signed an expanded deal with Amazon Studios to produce films and TV. Jordan’s company Outlier Society will develop a new Muhammad Ali limited series, to be executive produced by Jay-Z’s Roc Nation.

Jordan said, “It’s an incredible honor and I bring tons of respect to it. It’s a healthy weight to carry, to be able to tell the story of Muhammad Ali. It’s called The Greatest right now and we’re partnered with Roc Nation on the music side of things. It’s a project where we’ve partnered with the estate and we’ll be able to tell this story with no red tape. It’s a limited series that will really dive into the life of Muhammad Ali.”

Jordan added that he will not be acting in the project, and will instead will be working behind the scenes: “People know Muhammad Ali from his boxing days, but this is an opportunity to go beyond the ring, and more into the man. It’s going to give more of a 360 degree view of who he was. And no, I’m not playing that guy, I can say that for sure, and we are still in early stages here and can’t say too much. We are still putting the pieces together, but it feels like something to look forward to in the future.” 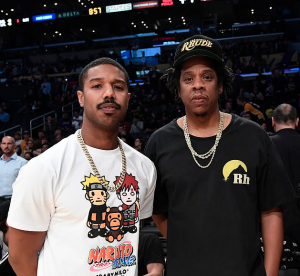 Michael B. Jordan and Jay-Z to Produce TV Series About Muhammad Ali

Via thesource.com
A recent report from Deadline has confirmed that Jay-Z’s Roc nation will e teaming up with…
02/16/2021 9:19 AM